So. Since a lot of you got Battlefield 2042 and the game has a lot of Lil Bugs and Issues right now I wanted to make a thread about news and updates to be able to be well informed. So I will start posting here.

First, there is a twitter made by fan that follows Devs and has direct Communication with called Battlefield Bulletin
https://twitter.com/BFBulletin?s=20

And there is also Battlefield Direct Communication made my EADICE,
https://twitter.com/BattlefieldComm?s=20


Alright So. Right now we got some updates coming tomorrow on the 18th and the servers will be shut down for approximately 60minute,


1.
NOTICE: #Battlefield2042 will be getting a small update tomorrow (0.2.1) across all platforms, with fixes for critical issues identified prior to the start of Early Access.

Timer clock The update will go live at 8AM UTC.
Hammer and wrench Servers will be offline for 60 minutes.
Down-pointing double triangle Patch notes below. 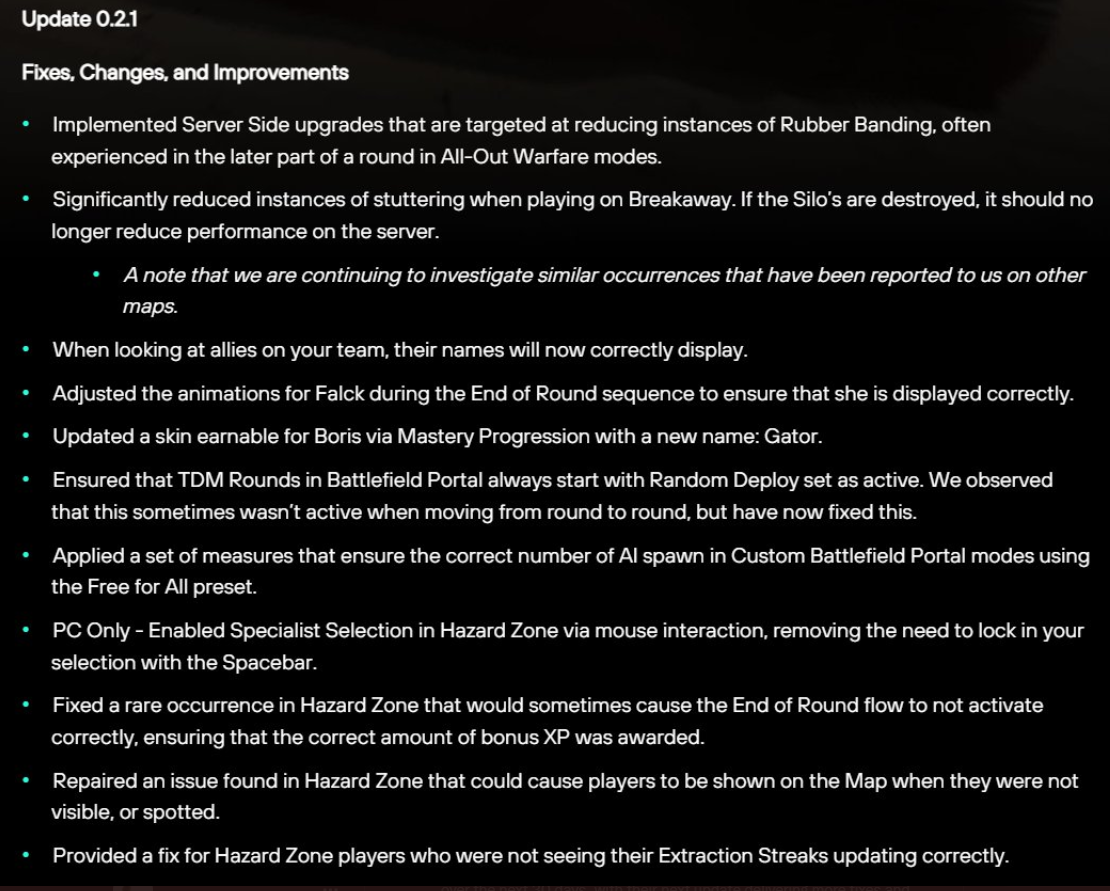 EA DICE says they’re presently scheduled to release "two further updates" over the next 30 days, with their next update delivering more fixes and improvements that they’ve identified during the Early Access, and a larger and more "substantial update" following after that 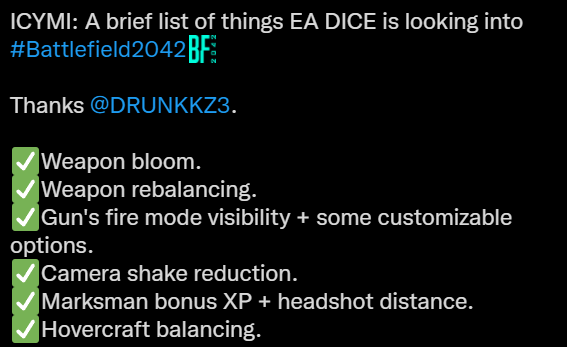 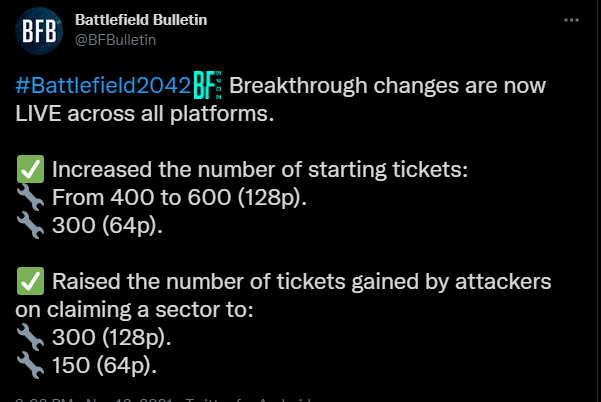 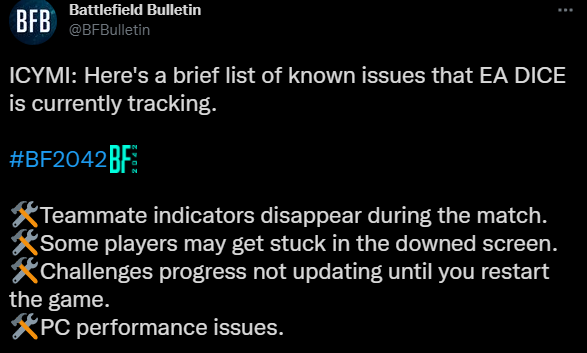 Don/Zendar and myself got this glitch yesterday 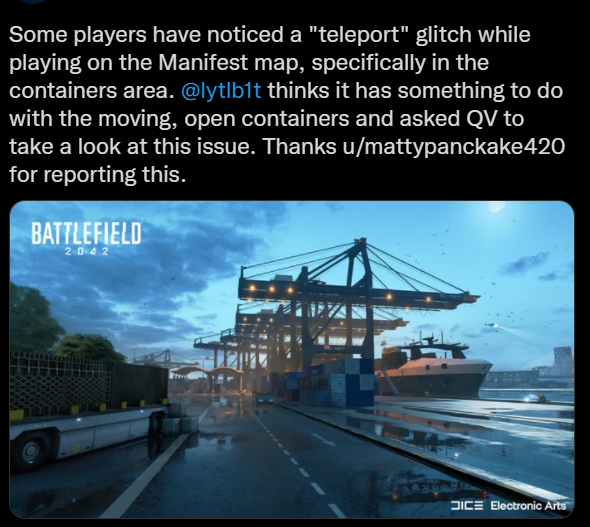 The scoreboard will make a return Soon!! 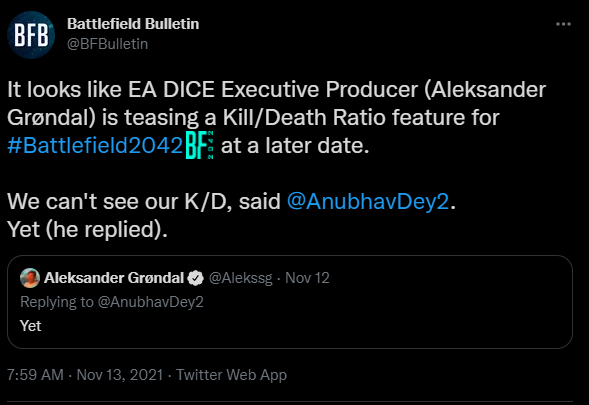 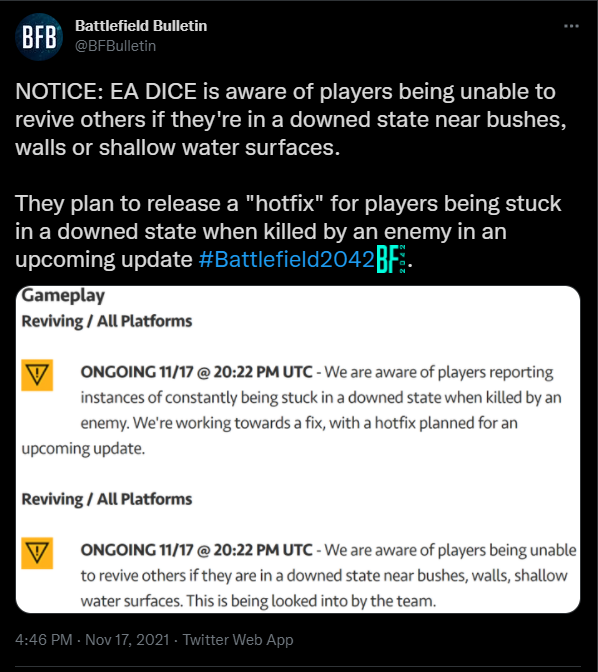 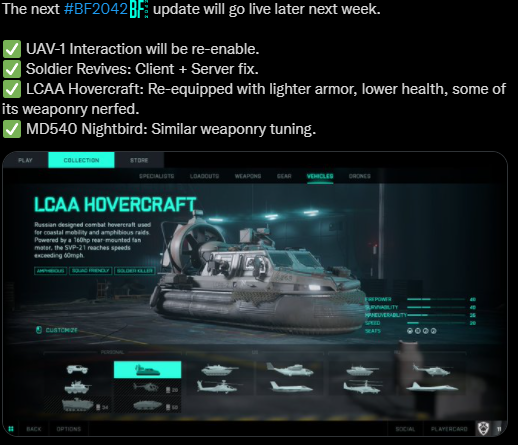 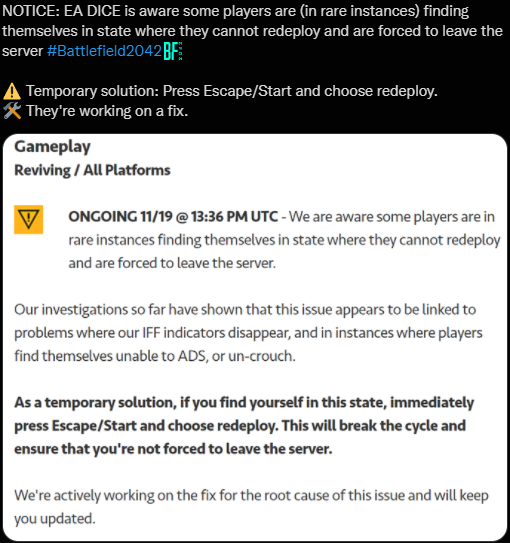 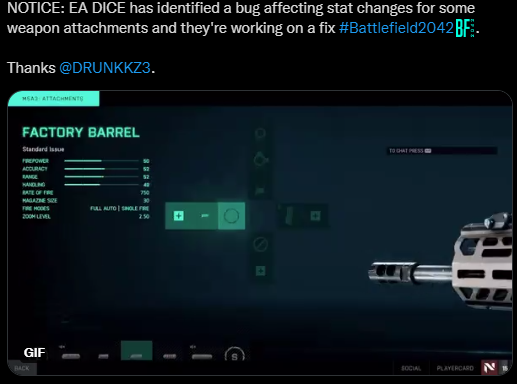 You read all of it directly on their website
https://www.ea.com/games/battlefield/ba ... road-ahead
Top

Last update from EA until the new year:

Update #3.1 arrives on December 9. Here is a short summary of key changes to expect:
Improvements to bullets hit registration consistency.
Balance changes for bullet dispersion and recoil
Further balance changes to Ground Vehicle 30mm, 40mm, and 57mm Cannons to reduce their effectiveness against infantry
A fix for a rare bug where a player could appear invisible to enemies
Fixes for several bugs related to Grenades and Launchers
Improvements to the menu flow for Xbox players to make it easier to opt-out of Cross-Play
Multiple audio improvements to enhance your overall sound experience, focused on clarity, distance and directional perception


Update #3.1 is our last game update before the start of the holidays. That means our teams will take a break towards the end of this month and return in the new year with fresh eyes ready to go on the road to Season One. We’ll see you again in the new year where we’ll talk more on further changes and improvements you can expect for Battlefield 2042.

Players that are not the Party Leader can now cancel while waiting in a queue
Xbox - Cross-Play can now be enabled/disabled in the Options menu on Xbox
Your Sort settings will now be correctly remembered when refreshing the Battlefield: Portal Server Browser
Fixed an issue where loadouts would sometimes be empty on the spawn screen after joining a server, preventing weapon selection
Made improvements to ensure Aim Assist is more consistent during console gameplay
Ranger’s effective combat range and overall health has been decreased
Audio

Made various tweaks to the overall audio experience to improve clarity, distance, and directional perception
Fixed an issue where soldiers would not always play indoor specific footsteps

Removed bounce from Underbarrel Grenades when firing at short distances
40mm AP Grenades now properly damage vehicles
Fixed some weapons displaying wrong ammo counts for specific magazines
DXR-1 and NTW-50 Bolt Action rifles reload animation increased by 0.2 seconds
Adjusted dispersion values for most weapons, which results in a faster dispersion decrease when tap firing or doing short bursts
Adjusted dispersion increases for most weapons. It now takes slightly longer for weapons to become overly inaccurate in sustained fire
Adjusted the recoil values to prevent over aggressive recoil jumps for the AK24, LCMG, PKP-BP, SFAR-M GL, and PP-29
Improved hip fire accuracy for all SMGs to make them better stand-out from other automatic weapon archetypes
LMG dispersion and recoil lowered to improve performance in sustained fire
Additional improvements to recoil control for all weapons, more specifically automatic weapons.
Increased close range damage and consistency of the MCS-880 when using Buckshot Shell or Flechette Shells
Fixed a bug that caused bullets to be fired below the player’s aims for the SFAR-M GL and the K30
Vehicles

We’re reducing the Ground Vehicle 30mm Cannon effectiveness versus infantry. It now overheats faster, has a slightly reduced rate of fire and blast damage, and increased fall off damage at distance

Increased the time to detonate a Frag Grenade from 1.1s -> 1.4s after first bounce on a hard collision
Increased damage of Frag Grenades across game modes to deal 120 damage and guarantee a kill on armored players too
Reduced Frag & Incendiary Grenade max ammo account from 2 -> 1